Kos is the second most popular island of Dodecanese, after Rhodes. Known for its historical sites, beautiful beaches, and lush vegetation, Cos is visited by almost 1 million tourists every year!

Kos has a 5,000 years long history and has been influenced by many cultures, such as the Romans, the Venetians, the medieval Knights, and the Ottomans. Thanks to the remains of all these cultures, sightseeing is one of the best things to do in Rhodes. The most important of them is Asklepieion, one of the top holistic healing centers of the ancient world, which followed the medical guidelines of Hippocrates, the father of modern medicine. Other sights worth visiting in Kos are its churches, Neratzia medieval castle, the ancient Greek Agora, and Antimachia Castle.

Long, narrow Kos lies just off the Asia Minor coast, tied with Karpathos as the second largest in the Dodecanese group. The Minoans, attracted by the excellent harbour at the northeast tip, settled there during the 15th century BC. The “other” ancient town, Astypalaia in the southwest, was the birthplace (ca. 460 BC) of Hippocrates (Ippokratis in Greek), the father of systematic medicine (and purported author of the Hippocratic oath still taken by doctors today). Shortly after his death in about 370 BC the islanders built the Asklepion shrine, named for the god Asklepios, which also served as a therapeutic centre known throughout the Greek world, run in accordance with Hippocratic methods. In 366 BC the “capital” was moved from Astypalaia to the Minoan port, which despite repeated earthquakes flourished owing to its proximity to ancient Halikarnassos (now Bodrum) on the Anatolian coast just opposite. In 333 BC Kos was taken briefly by Alexander the Great, and then became semi-autonomous under the protection of the Egyptian Ptolemies, including Ptolemy II who was born here. By the late first century BC Kos was effectively (and prosperously) under Roman rule, and from this time – especially after the severe earthquake of 27 BC – date most of the ancient ruins on view. Christianity came early, in the person of St Paul, and there are three early Byzantine basilicas to be seen. In 1314 the crusading Knights of Saint John, based on Rhodes, began work on the large fortress which still guards the entrance of Kos harbor, using extensive masonry (especially from the Asklepion) dislodged by successive earthquakes. In 1523 the knights surrendered to the Ottoman Turks, who had taken Rhodes the previous year, and who settled in for nearly four more centuries until Italy seized the Dodecanese in 1912 as part of her larger war with the Ottomans focused on Libya. In 1933, another earthquake levelled most of the town and gave the Italians a pretext for some extensive archeology and urban renewal. Kos finally become part of Greece in 1948, which ironically accelerated emigration (mostly to Australia or Canada), and the depopulation of the half-dozen hill villages in favor of the coast.

One of the best things to do in Kos is cycling. It’s not a surprise that the island is also known as the “Cycling island”, as bicycling is a very popular means of transportation. There’s also a 13 km long cycling road, ideal for bike strolls, starting from Faros beach and ending at Psalidi beach! Apart from the cycling road, though, there are many mountain cycling trails, ideal for cycling in nature!

What can we say about Kos beaches? They are endless! Sandy, shingle, crowded, secluded, organized, unorganized… There’s a beach for every taste and they are all easily accessible. Don’t miss to visit some of the best Kos beaches, such as Kardamena beach, Tigaki beach, Mastichari beach, Marmari beach, and Kefalos beach. 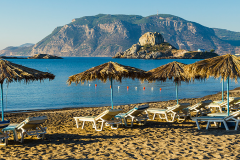 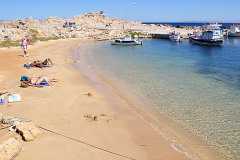 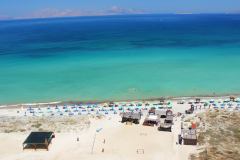 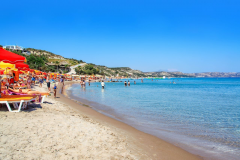 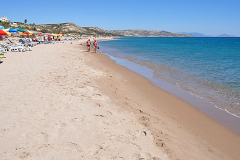 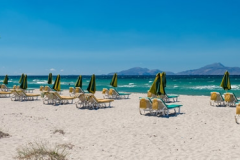 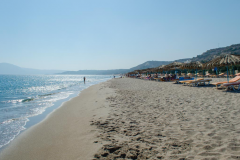 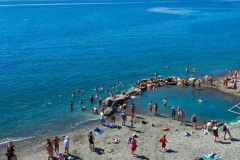 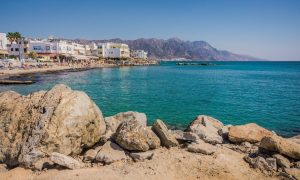